Let me just say that this gentleman is probably one of the funniest authors around. I’m not sure how many times I chuckled apparently not to myself while reading this; earning peculiar glances that I could only respond to by grinning foolishly, still laughing in my head, or hiding my face behind the covers; but it was worth it. However, as you can guess from the cover, this book’s got its dark side too. 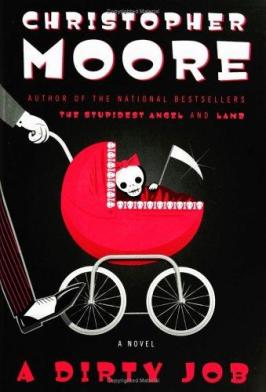 In fact, it’s about Charlie Asher, a Beta male, who has been appointed a job as Death. Along with other ‘Death merchants’, Charlie helps human souls pass on to their next life, a responsibility which he must juggle while taking care of his family and second hand business. What follows is a battle between good and evil as forces from the Underworld threaten to take over. So it’s basically a hero myth, but with context, character, and style unlike any other.

Like I said, Christopher Moore is one of my favourite authors because I can always count on his books for a fun, dramatic read. The characters are colourful, the dialogue between them a zany train of thought, and you never know what to expect as you turn each page. It’s like every time you think you find and follow a straight path, wham! a glass wall appears changing your direction with a most surprising statement or event.

Characters include a Gothic girl chef obsessed with death, an ex-cop who is desperately lovesick and thinks everyone is a serial killer, a reflective homeless known as the Emperor of San Francisco, and two hellhounds named Alvin and Mohammed. But despite the randomness, everything fits, crazy antics contribute to the plot and ’embellishment’ descriptions become relevant; so when you step back, the winding labyrinth of a journey makes a beautiful picture.

In this case, it is the coping and understanding of death that is gained alongside Charlie’s development in his new career. The humour infused throughout makes the serious theme of death not so grave, and I won’t give it away, but leads to a satisfying and serene ending than can be considered enlightening.

One of the characters, Mrs. Ling, is an older Chinese woman who cooks and eats everything, including the deceased pets of Sophie, Charlie’s daughter whom she babysits. Clearly it is a hilarious stereotype, and though its true that Chinese cuisine consists of the strangest meats and parts, how is it really any different than a processed burger patty? All I’m saying is that isn’t it good not to waste anything? Then again I am impartial in the defense…

It is the first book in the series which I hope to read entirely in the future, and I recommend other books by Moore as well, particularly Lamb: The Gospel According to Biff, Christ’s Childhood Pal.
So, ending my rambling, if you like comedy, mystery, and everything unexpected then I say go for it.